Hong Kong and Australia signed today (March 26) a Free Trade Agreement (FTA) and an Investment Agreement, which are comprehensive in scope, covering trade in goods, trade in services, investment, intellectual property, government procurement, competition and other related areas; and are modern and of high standard. The Agreements provide Hong Kong traders and investors with legal certainty and more favourable access to the Australian market, whilst creating more business opportunities and enhancing trade and investment flows between the two places.

The Secretary for Commerce and Economic Development, Mr Edward Yau, and the Australian Minister for Trade, Tourism and Investment, Mr Simon Birmingham, signed the Agreements in Sydney, Australia today.

“Hong Kong and Australia, both staunch advocates of free trade, have today sealed two high quality deals. The commitments we made to each other far exceed our World Trade Organization commitments, thereby enabling our goods, services and investments to enter each other’s market under more preferential terms. Against the prevailing uncertainties in the global economic environment, the two bilateral agreements, in providing high transparency and predictability for trade and investment, give a big boost of confidence to our rules-based trading system,” Mr Yau said.

“On trade in services, the quality negotiated outcome generally represents Hong Kong’s and Australia’s best deal with our respective FTA partners. In some 140 services sectors that Australia has made specific commitment under the FTA, Hong Kong service providers are able to enjoy market access and treatment no less favourable than Australia’s local service providers under like circumstances. In this FTA with Hong Kong, Australia has also committed to liberalising full range of its arbitration, conciliation and mediation services and certain rail transport services, which Australia has never offered to its other FTA partners, except New Zealand,” he continued.

“Immediately upon the entry into force of the FTA, Hong Kong-originating goods can enter Australia totally tariff-free and via simplified procedures. This tariff treatment is among the best offers Australia has extended to its FTA partners,” he said.

“On investment, Hong Kong investors can enjoy more favourable access to the Australian market under the FTA as the monetary thresholds for investment screening have been raised. Investors from both places will also benefit from the modern provisions on treatment and protection under the new Investment Agreement, which will replace the one signed in 1993,” he added.

Other benefits of the FTA include facilitative arrangements for business travel as well as provisions to facilitate access to each other’s government procurement markets, effective protection of intellectual property rights and promotion of competition.

“To help Hong Kong enterprises and investors expand their markets, further reinforce Hong Kong’s status as an international trade and investment hub and establish our worldwide network of economic and trade connections, we have been actively seeking to forge FTAs and Investment Agreements with economies that have strong economic and trade connections with Hong Kong, markets with development potential or at strategic locations, as well as like-minded trading partners,” Mr Yau said.

“The FTA with Australia is the fourth FTA that the current term of the Hong Kong Special Administrative Region Government has signed with its trading partners since taking office in July 2017,” Mr Yau added.

Australia was Hong Kong’s seventh largest services trading partner in 2017, with the total services trade between the two sides amounting to HK$44 billion. It was Hong Kong’s 20th largest merchandise trading partner in 2018, and the total merchandise trade was about HK$54 billion. On investment, as at the end of 2017, Australia ranked eighth among Hong Kong’s destinations of outward direct investment, with a stock of HK$134 billion, and it ranked 17th among Hong Kong’s sources of inward direct investment, with a stock of HK$33 billion. 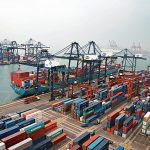